How to Take a Corner Kick

Set plays offer some of the best scoring opportunities in soccer. They can also result in costly turnovers if not done correctly.

Get tactical about your corner kicks and your team will score more goals! 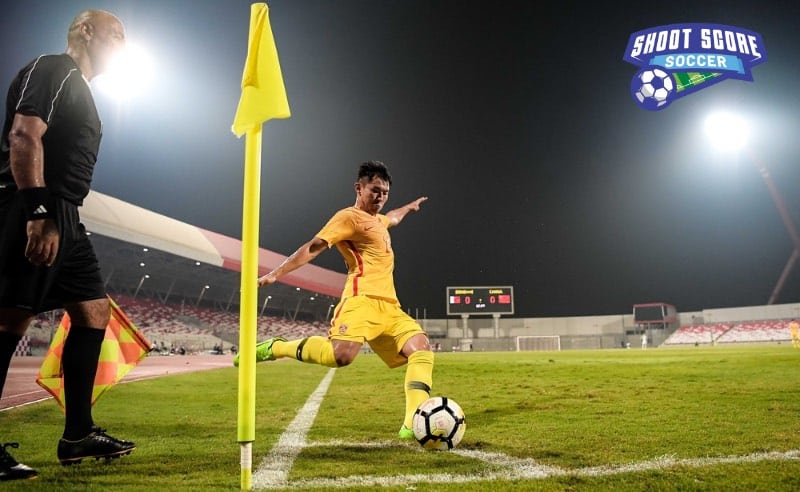 What Is a Corner Kick?

A corner kick is a set play awarded to the offensive team when the ball is last touched by the defending team and crosses the goal line.

A player takes a corner kick from the corner of the field closest to where the ball crossed the goal line. A half circle and a flag post mark the corner.

An in-swinging corner is when the kicker plays the ball in the air and the ball curves toward the goal.

An out-swinging corner is when the kicker plays the ball in the air and the ball curves away from the goal.

A straight corner is when the kicker plays the ball in the air, and it flies directly toward the goal area without curving. Typically, the kicker touches the ball with their laces to prevent curling it.

A clipped corner kick is when the kicker plays the ball higher into the air and at a lower speed. It is more of a “lob” to the players attacking the goal area.

A short corner is when the kicker passes the ball to a player closer to the corner (usually about 5 to 10 yards away). This ensures the attackers retain possession of the ball, so they can create an attack on goal. A team may also use a short corner to run down the clock.

The “crash the box” corner kick strategy is simple and highly effective. The goal of this strategy is to cross the ball into an area where three players will attack it.

Here’s how to crash the box:

Adding pressure on the keeper can distract them, make them flustered, and create an opportunity to score. Most corner kick strategies involve creating space in the goal area, but this one places players close to the keeper and teammates.

This strategy involves crowding the box with four to five players surrounding the keeper and only about two yards from fellow teammates. The kicker delivers the ball into that area, and the attackers try to score or rebound the ball.

The most common mistake with this tactic is fouling the keeper when they jump to catch the cross. Players must be cautious of the amount of pressure they apply on the goalie.

A short corner strategy is dangerous for the defense because it gives the offense a better angle from which to score.

Here’s how to perform a short corner:

A header is an ideal way to score on a corner kick if you have a tall player on your team or one that can jump higher than most.

The kicker plays the ball toward the back post where the tallest or highest jumping player is ready to receive it. An in-swinging corner kick is best for a back post header.

Some teams may place two players on the back post to increase the chance of winning the ball. Other players situate themselves where they can score if the header deflects or comes back across the front of the goal. At least one player must stand back to retrieve the ball if the defense clears it.

The player on the team with the most accurate delivery is typically the one to take a corner kick. They should be able to consistently place the ball on the desired areas of the field for various corner kick strategies.

Taking an accurate corner kick requires several techniques and an ability to follow instructions. A kicker must play the ball according to the plan set by the coach, captain, or team.

To take an in-swinging corner kick, plant your stabilizing foot with your toes pointed toward the edge of the penalty area. Strike the ball slightly low and off to the side to create the desired curve.

Follow the instructions for an out-swinging corner kick but from the opposite corner. Aim more for the penalty spot rather than the corner of the penalty box for increased accuracy.

Technique for a Clipped Corner (AKA Drop Ball)

Strike very low on the ball with the instep of your foot to chip it higher into the air with a backspin. Arch your body in the direction of the receiving player for more power and float.

These kicks should fly high, so your team has time to get into position. However, they’re also easy to defend because the opposition has time to find their position too.

Adding topspin to your corner kick technique can make it tricky to defend, resulting in more scoring opportunities for your team. Top spin allows the ball to drop where you want it in the penalty area.

Add top spin by hitting the ball approaching the ball from a slight angle. Strike the ball slightly lower than the middle. Striking it too low will result in a backspin rather than a topspin. Kick the ball with the inside of the foot, then stop the follow-through short by not allowing your foot to swing up.

Can You Score Directly From a Corner Kick?

Yes, according to the Football Association rules, you can score a goal directly from a corner kick. A goal scored this way is known as an “olimpico”.

Of course, in every match you’ll also face corner kicks being taken against you. Learn how to defend corner kicks here.